​SCROLL DOWN BELOW THE MENU FOR THE HISTORY OF ST MARY'S
St Mary of Furness Roman Catholic Church, Ulverston with Our Lady's, Dalton 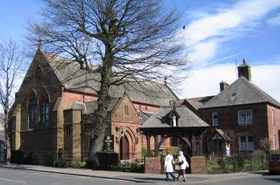 St Mary's RC Church in Ulverston was opened on Wednesday 21st August, 1895.  It was the second Catholic Church in Ulverston.  The foundation stone had been laid on 15th August 1893.  The building is Gothic in style and built on a nave and aisle plan, with chancel and side chapels at the east end.  A tower was planned at the south west corner.  The buildings are constructed with local red sandstone from St. Bees and the roof is tiled with local green slate. Granite from Shap was used for the columns of the nave arcade. William Waite of Ulverston was the builder and the architects were Sinnott  and Powell of Liverpool.  The church accommodates about 600 people.  Most of the art work in the church is attributed to Father Allan, the parish priest at the time of the opening.  He sculpted the statue outside on the front of the building, carved the pulpit and painted the life-size copy of Leonardo’s Last Supper at the back of the church.  The Stations of the Cross are also his work and the large carved Pascal candlestick.  The carving on the high altar is Austrian and the communion rails are made of wood.  In 1909 the Lady Altar was donated to the church by a convert, Sarah Ann Doody.  The stained glass window over the High Altar was commissioned by Father Delaney and he also had installed the new organ which was purchased from Mr Latham of Penny Bridge. The lych-gate, at the entrance to the church grounds was built as a memorial to those eleven men of the parish who were killed in the Great War.  One of the stained glass windows on the right side of the church commemorates the bravery of Lieutenant Basil Weston of the Green Howards who was awarded the Victoria Cross posthumously for his outstanding bravery in the Second World War.  After Vatican Council, Mass was said facing the people from on a temporary altar.  The High Altar table was moved forward in 1970.

A house adjoins the church.  This is the presbytery and it was built at the same time as the church.

Next to the church, across the car park on Victoria Road is the church hall.  This building was developed from the parish school.  The school had been built before the church.  In 1887 Father Massey secured the site in what was then known as Dragley Beck Lane, now Victoria Road for the new catholic school and later for the larger church.  The school was built at a cost of £1,100 for the site and £1,200 for the building.  The rear of the school opened onto Brogden Street.  Unfortunately Father Massey became ill and left the area before it was completed. The school was well built for its time and it had two storeys.  The rooms were heated by coke stoves and lit by gas lamps. The downstairs rooms housed the infant classroom and standard 1.  In the early days there was a gallery in the infant department and the monitor system was employed.  A pupil teacher was often in charge of groups of children.     The kitchen and coffee room was built on to serve the needs of the church community.  The hall is used for a variety of activities including dancing classes and personal wellbeing.

In November 2014, the parish community was merged with that of Our Lady's at Dalton to form a single new parish of Saints Mary and Margaret, with each church retaining its original title.

Other Roman Catholic sites in Ulverston

If you walk from the church to the traffic lights, cross the main road and head down New Market Street to the T junction, then turn right.  Walk along, Market Street until you reach the Lloyds TSB building.  Turn left here and walk up Union Street.  At the top of the street you will see the original Catholic Church, now a saleroom. On the side of the building is a blue plaque detailing the building’s history.  The house next door was the home of Father West, the author of ‘A Guide to the Lakes’ and ‘The Antiquities of Furness’.  This building was also used as a school for young gentlemen.  It was founded by Dr Everard.  At the back you can see where there were stables to house the young men’s horses and dogs.  From this house walk down the lane , at the junction of Back Lane and Tarnside you will find the first parish school.  The date of opening 1824 can be seen over the door together with the sign of the fish. The school was extended in 1831.  Look to your left and you will see a face in the garden wall.  It is assumed that this face came from the ruins of Furness Abbey.  Back to the school, walk along the Tarnside keeping the school to your left. You will come to the playground of Church Walk Infant School.  The original Catholic graveyard is under the grass in the playground.

Retrace your steps now to the original Church building and turn right along Fountain Street.  At the roundabout turn left into King Street and follow the road to the traffic lights.  Cross the road and carry on up Princes Street. The building on the corner of Lightburn Road and Princes Street, now flats, once housed the Catholic Club. Father Carr founded, endowed and equipped the Catholic Association Club out of his own private funds in the 1920s.  This three storey building was the centre for the church’s social activities from then to the mid-1970s. The church’s fundraisers ran Bingo sessions and whist drives attended by townsfolk to raise money to build the new school at Springfield Rd.  Continue up the road past the turn to the station until you arrive at St.Mary’s Roman Catholic School.  This building was opened in 1971 and the children transferred here from the Brogden Street building, freeing that building to be used as the new Catholic Club.

Walk back to Conishead Road and go down the hill, cross over the road and walk down Lightburn Avenue past the park.  If you walk along the block after Chapel Street, the end house of this block housed a convent school. The convent school was originally housed in Hart Street until this house was bought.  There was a convent in Ulverston from 1913 until 1929.  The Nuns from the order of The Sacred Heart of Mary then moved to the convent in Barrow.